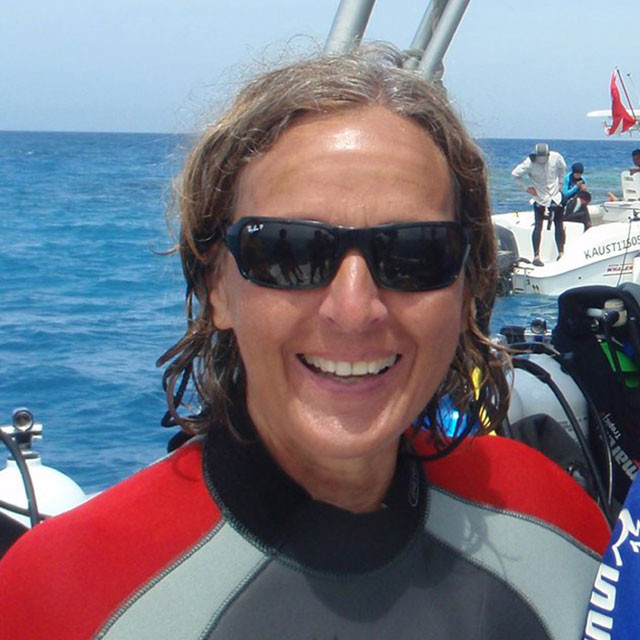 My research focuses on population dynamics and species interactions of marine species, mainly reef fishes. Below are brief description of several aspects of this work:(1) Population dynamics of damselfishes, (2) Temporal patterns in reef communities, and (3) Development of restoration techniques for surfgrass (Phyllospadix).

Russ Schmitt and I have been studying the population dynamics of four species of damselfishes (Dascyllus trimaculatus, D. aruanus, D. flavicaudus, and Amphiprion chrysopterus) since 1992. In this work, we are exploring whether, and to what extent, density dependence operates during the reef-associated life stages (e.g, newly settled young-of-year through adults), as well as the relative contributions of larval supply and density-dependent and density-independent mortality in setting patterns of abundance. The study focuses on species of fish that have features in common to many reef fishes (e.g., planktonic larvae, settlement preferences, sedentary reef-associated life stages, structured populations). The model system was chosen in part because many of its aspects are amenable to observation and experimentation and because the species vary in a key aspect - the strength of feedback by adults on young. Variation in this latter aspect is permitting fruitful comparisons.

Specific objectives of the damselfish research are to explore population dynamics and regulation by determining the contributions of processes to mean abundance and to variation about the mean, and link dynamical behavior of each species to the underlying demographic causes. This work has already contributed to the ongoing debate about the causes of temporal variation in reef fish populations. We have completed several years of intensive study of the settlement process (from the plankton onto the reef) of the three Dascyllus species and have been able to partition the relative contributions of larval supply, density independent and density dependent mortality to setting cohort abundance. Our studies, which include the use of night-time video with infrared illumination to reveal behavior of newly-settled fish, have shown that there is a very brief period following settlement to the reef where intense density-dependent mortality occurs. This phase lasts only a few days, then mortality is density independent. These findings help explain why the vast majority of previous workers who have examined slightly older stages of fish have not been able to detect density dependent mortality, and have argued that supply of larvae is the prime determinant of patterns of abundance of reef fish. Our video work has revealed that predators are the source of mortality, primarily during the crepuscular and night-time periods, and that shelter space strongly influences the spatial patterns of abundance of adult damselfishes.

Settlement of young damselfish to the reef occurs at night during the dark phases of the moon. Our video studies of settlement have shown that olfactory and not visual cues appear to play a large role in selection of settlement substrate. The swimming behavior of settlers suggests that they follow odor plumes to find appropriate settlement sites. Both the type of substrate (species of coral or anemone) and the presence of conspecifics influence the attractiveness of a site. Not only do the youngest damselfish show active choice of microhabitats, but older stages also display strong affinities to particular types of reef habitat. We have recently initiated a broad study of habitat specificity of lagoon fishes. Our goal is to uncover ontogenetic patterns of habitat specificity and explore whether species on different trophic levels tend to display different patterns of specificity. Eventually we hope to experimentally explore the mechanisms that generate patterns of habitat use.

This work is being carried out at the U.C. Berkeley Gump Biological Station, Moorea, French Polynesia. We recently received renewal funding from NSF for an additional 5 years (July 2000- July 2005).

This work investigates long-term trends in population abundance, species richness, and species composition of nearshore reef fish communities. There is increasing interest in the response of communities and their component species to temporal environmental variation, especially in the context of global warming and other long term trends. During the past few years, my colleagues and I have been analyzing available data for Southern California reef fishes. We have found that nearshore reef fish communities respond to environmental variation (such as El Nino events) in predictable ways, but tend to recover rapidly. Our findings also indicate that these communities have responded strongly to temperature and productivity changes that have occurred during the past 20 years in the Southern California Bight, with many populations of reef fish (and other benthic organisms) declining on the order of 80% in the past decade. It is not clear whether any of these changes are signals of global warming. This work has involved analyses of two of the longer data sets for unharvested reef fishes that exist in Southern California (data for 5 species at Santa Cruz Island collected by Russ Schmitt and me, and that of John Stephens, Jr. for two communities of fish south of Los Angeles). In collaboration with Dr. Andy Brooks, we have been exploring temporal patterns of abundance in several trophic levels and for a variety of types of organisms in the Southern California Bight. To date this work indicates that the various species have responded similarly. This result contrasts with the predictions of several current models of marine communities. The recently-awarded NSF Long-Term Ecological Research program for the Santa Barbara Channel will afford an opportunity to experimentally explore effects of environmental perturbations on species that inhabit nearshore kelp bed communities.

3. Development of restoration techniques for surfgrass

Dan Reed (of the Marine Science Institute) and I are collaborating on a project to investigate the biology of surfgrass, Phyllospadix torreyi, in some detail, and to use this information to develop restoration techniques for beds of surfgrass that have been damaged or destroyed. Surfgrass is one of the most important structural components of the intertidal and shallow subtidal rocky shore in Southern California, providing habitat for fish and many important invertebrates. This species is easily damaged by anthropogenic activities, and because it lives attached to rocks in a high energy zone, successful propagation and restoration techniques have yet to be developed. We have funding from the County of Santa Barbara and the Minerals Management Service to find out whether early life history stages (seeds, seedlings) of Phyllospadix could be used in restoration attempts. [The usual technique for other species of seagrass is to outplant older stages. This is a successful approach in the soft bottom habitats in which these plants live, but it does not work with Phyllospadix.] To date, the research has involved rather detailed studies of the life history of surfgrass to understand its complex life cycle and determine where in the life cycle bottlenecks to population recovery occur. In a four-year long field sampling program we assessed spatial and temporal variation in such features as flowering, seed production, and recruitment (via seedling establishment). We have also conducted laboratory studies of germination, and in field and laboratory studies we examined the role of seed predation in mortality of youngest life stages. We found that a major bottleneck in population recovery occurs during the time from release of the seeds into the environment until they germinate and become established on host plants. There is tremendous mortality from predators, desiccation and other factors during this critical period. We have developed promising techniques for restoration involving outplanting of laboratory-germinated seedlings that are attached to artificial hosts (nylon mesh). This technique appears to greatly lessen mortality during the critical period. Our research has recently expanded to include work on the genetic structure of populations of Phyllospadix (in collaboration with Scott Hodges and Douglas Bush of EEMB). This work has revealed that contrary to the expectation that each local bed of surfgrass consists of one clone, in fact beds are comprised of complicated mosaics of different individuals and clones. Further, there is regional variation in genetic structure of the populations. These findings will have important implications for large-scale restoration attempts, because they yield insight into the genetic features that must be taken into account when seeds are selected for use in outplants.