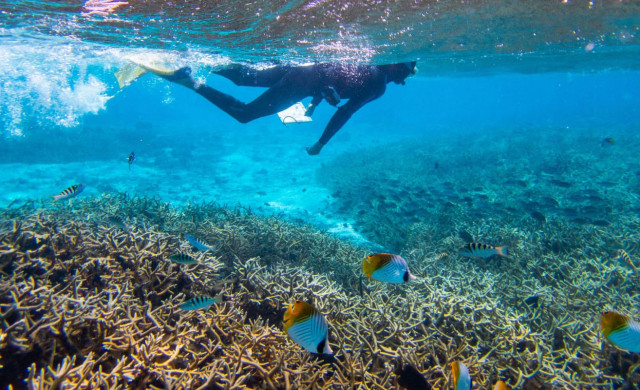 A variety of reef fishes swim among the staghorn coral in Mo’orea, French Polynesia as a researcher swims overhead.

You might not think an animal made out of stone would have much to worry about in the way of predators, and that’s largely what scientists had thought about coral. Although corallivores like parrotfish and pufferfish are well known to biologists, their impact on coral growth and survival was believed to be small compared to factors like heatwaves, ocean acidification and competition from algae.

But researchers at UC Santa Barbara have found that young corals are quite vulnerable to these predators, regardless of whether a colony finds itself alone on the reef or surrounded by others of its kind. The research, led by doctoral student Kai Kopecky, appears in the journal Coral Reefs. Kopecky and his co-authors were curious how corals can reemerge following large disturbances like cyclones and marine heatwaves, which periodically devastate the reefs of Mo’orea, French Polynesia, where the research was conducted. 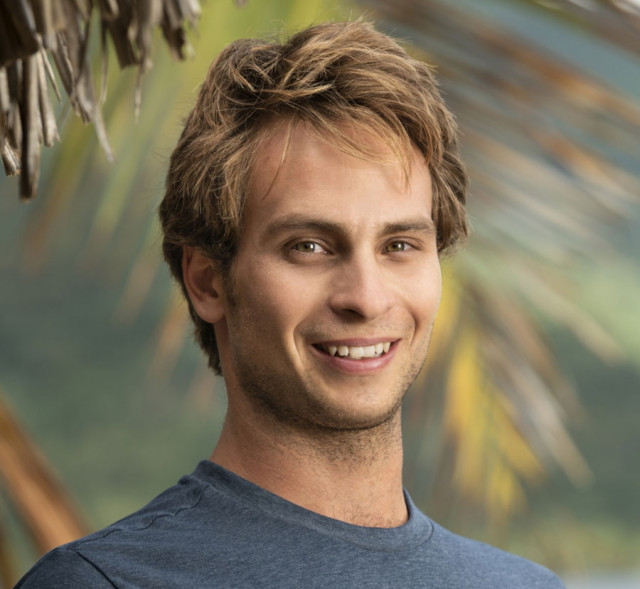 “Mo’orea is prone to big heat shocks, storm waves, cyclones and predatory sea star outbreaks,” said co-author Adrian Stier(link is external), an associate professor in the Department of Ecology Evolution & Marine Biology and one of Kopecky’s advisors. “It just wipes the slate clean in terms of coral death. And sometimes, just a few years later, you can swim around and see thriving life. We’re still really curious about what allows these ecosystems to bounce back.”

Scientists had implicated predators in shaping coral population dynamics, but there hadn’t really been many direct studies. “People who study coral reefs have thought a lot about the supply of new babies coming from elsewhere, or limitation by the amount of nutrients, or competition with algae as important drivers of coral recovery,” Stier continued. “But there hasn’t been as much done on the importance of predators as a limiting factor.”

After reviewing the literature on coral growth, mortality and predation, Kopecky decided to focus on the effects predation and density had on young coral colonies.

He planted small nubbins of Pacific staghorn coral at various locations on the reef either alone, in a group of four, or in a group of eight. Some of these groups were protected by metal cages, while others were left exposed. For the unprotected coral, Kopecky sought to determine whether high density increased or decreased predation on the staghorn. For the protected groups, he was curious how density influenced coral growth. 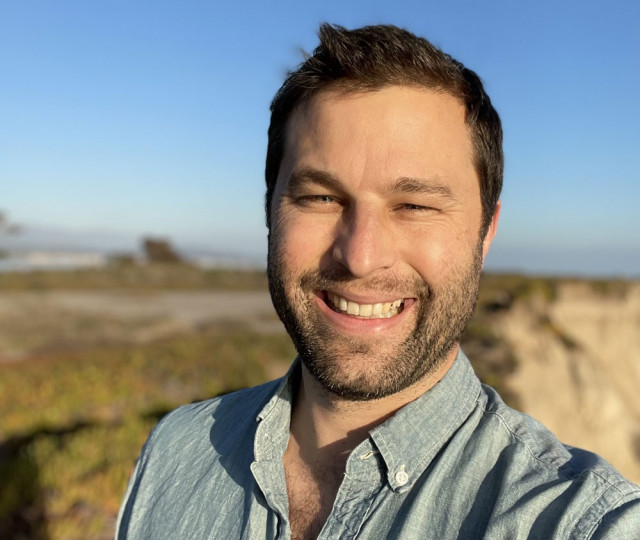 The researchers found that protection was key to these small corals’ futures. After 30 days out on the reef, nearly all of the unprotected nubbins had been completely consumed. In fact, density had virtually no effect on this outcome.

The researchers let the experiment run for an entire year. When they returned, virtually none of the unprotected specimens remained. On the other hand, the caged corals had outgrown their accommodations by year’s end.

“The corals that were protected grew all the way into the upper corners of the cages and were poking little branches out,” Kopecky recalled. “They formed a cube of coral inside the cages, whereas the ones that were exposed to predators were just barely hanging on.”

Coral are not typically fast-growing organisms, but staghorn coral grows quickly, giving it a competitive edge following disturbances that remove large amounts of coral. But according to Kai, staghorn coral are like the popcorn chicken of the reef: irresistible to a hungry corallivore.

The protected corals grew so quickly that Kai had to adopt a different way to measure them, because at a certain point the nubbins fused, and he could no longer unscrew their base plates to measure them in the lab.

So, if there’s no protection in numbers for these tasty staghorns, how do they ever survive their infancy? 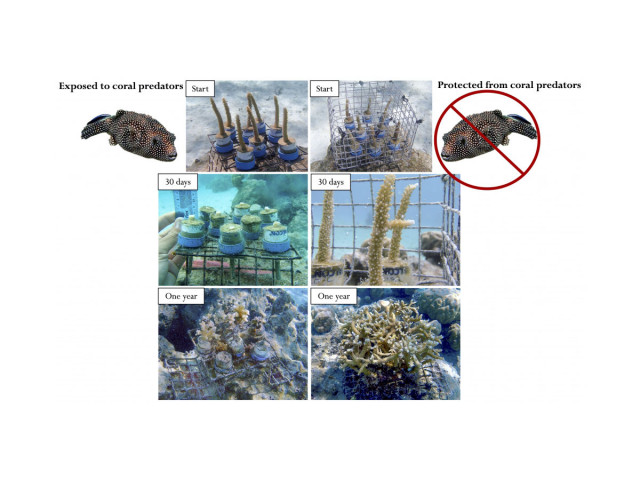 Protecting coral nubbins from predators had a striking effect on their vitality and growth. Kai Kopecky

The corals benefit from the protection of fish like the Dusky farmerfish, which farms algae on the reef. These farmer fish doggedly defend their territories, offering protection to any small coral that happens to settle in their range, Kopecky explained. And while algae and coral are often considered archenemies — with the former able to outcompete the later — by munching on their crops, the farmer fish keep the algae in check. This enables the coral to get through the stage where they’re vulnerable to predation.

The authors thought density would have some effect on predation. “I think it just turns out that this coral is so tasty that predators simply mowed everything down,” Stier remarked.

The team is considering running a similar experiment with cauliflower coral, which is more robust and slower-growing than the staghorn. Hopefully it’s also slightly less scrumptious, as well.

“When these pufferfish eat enough, you can see their bellies weighted down by the coral rocks that are in their stomachs,” Stier said. “I mean, they’re oddly shaped fish to begin with; they’re already having a hard time swimming without that ballast, but this makes it extra tricky.”

“It really is a cartoonish dynamic,” Kopecky added.

Staghorn coral is widely used in reef restoration efforts, especially in the Caribbean where this and a related species (elkhorn coral) are endangered. In fact, before joining UC Santa Barbara, Kopecky spent several months working as a coral restoration technician on the U.S. Virgin Islands.

“I had an opportunity to see coral restoration in action, but also see some of the limitations associated with it,” Kopecky said. “And then I was able to go and conduct research, like this experiment, that can feed back into and inform how restoration might be improved.”

Getting out-planted coral nubbins through this vulnerable life stage presents a major bottleneck to restoration efforts, Kopecky explained. He has already received feedback on the study from people engaged in coral reef restoration expressing how relevant his findings are to their work.

“When you protect these young, vulnerable corals from predators, the amount of growth is substantially higher than when they’re not protected,” Kopecky said. “It’s clear that coral predators can really shape whether young corals actually reach the size where they’re no longer vulnerable to predation.”