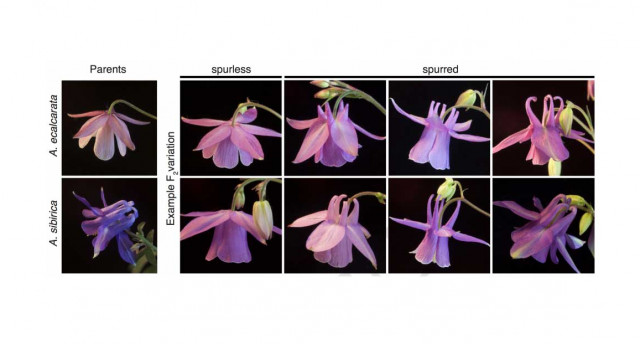 Hodges and Ballerini crossed the two columbine species on the left. The second generation of hybrid offspring displayed various levels of spur development.

Once in a while, over the history of life, a new trait evolves that leads to an explosion of diversity in a group of organisms. Take wings, for instance. Every group of animals that evolved them has spun off into a host of different species — birds, bats, insects and pterosaurs. Scientists call these “key innovations.”

Understanding the development of key innovations is critical to understanding the evolution of the amazing array of organisms on Earth. Most of these happened deep in the distant past, making them difficult to study from a genetic perspective. Fortunately, one group of plants has acquired just such a trait in the past few million years.

Columbines, with their elegant nectar spurs, promise scientists an opportunity to investigate the genetic changes that underpin a key innovation. After much research, UC Santa Barbara professor Scott Hodges, research associate Evangeline Ballerini, and their coauthors at Harvard University have identified a gene critical to the development of these structures. And to their knowledge, this is among the first key innovations for which a critical developmental gene has been identified. Their findings appear in the journal PNAS.

The researchers named the gene after Gregg Popovich, head coach of the San Antonio Spurs basketball team. “This gene is a transcription factor, which means it controls spur development in columbines by regulating the activity of other genes,” explained Ballerini. “So I chose the name POPOVICH because as coach, Popovich controls San Antonio Spurs development, in a sense, by regulating the activity of his players.”

The evolution of spurs in columbines’ ancestors seems to have led to rapid expansion in the genus. Around 70 species evolved over the past 5 to 7 million years, compared to its spurless sister genus, which counts only four species among its members.

And columbines aren’t the only flowers with spurs. The trait evolved independently in many different plants, including nasturtiums, larkspurs and impatiens. “And in each of those groups, the ones that have spurs have far more species than their closest relatives that don’t have spurs,” said Hodges.

“We think that diversity is linked to the evolution of this spur because the spur produces nectar, which attracts animal pollinators,” Ballerini said. Changing the length or shape of the spur changes the animals that can pollinate the flower. “Bees are only moving pollen between bee flowers, hummingbirds are only moving pollen between hummingbird flowers, so you’re not exchanging genes between those two different populations.” Eventually, the two can split into different species.

The question the researchers were trying to answer was how innovations like these develop in the first place. “If we can find genes that are important in the development of a key innovation, that will help us understand this kind of process,” said Hodges.

“In most of these cases — like in the wing example with birds, bats and insects — those evolved so long ago that it’s hard to find a particular gene that was critical for evolving that trait,” he added. “Here we have a fairly recent origin of a key innovation, only 5 to 7 million years ago, and it’s a fairly simple trait, so it’s a little more straightforward.” 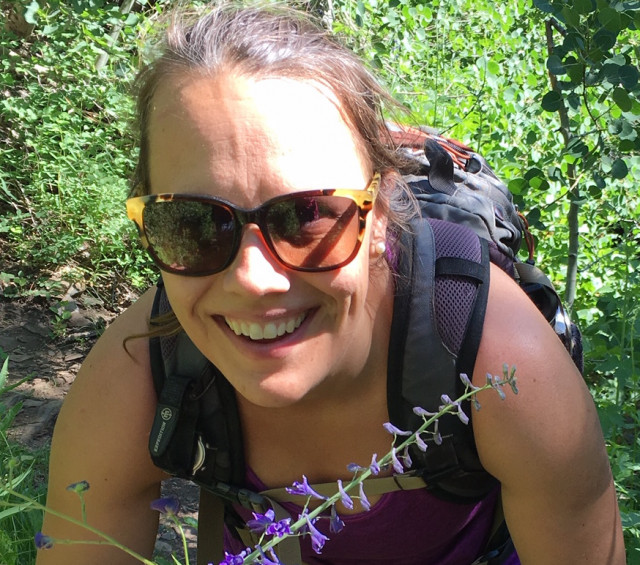 Since columbines evolved so recently, most of them can form fertile hybrids with each other. In the 1950s and ‘60s, a Polish geneticist crossed a spurless species — appropriately named the spurless columbine — with its spurred cousins. She found that in the first generation of offspring all had spurs, but self-pollinating these yielded a second generation where spurlessness reappeared in a quarter of the plants.

That ratio was crucial to Hodges and Ballerini’s work some half a century later. This simple fraction suggested that a single gene controlled the development of spurs. But columbines have roughly 30,000 genes, and only one was the gene they were looking for.

Following in the footsteps of his predecessor, Hodges also crossed the spurless columbine with a spurred species, and then self-pollinated the offspring. But unlike in the previous experiment, Ballerini and Hodges now had the tools to search the plants’ genetic code.

Ballerini sequenced the genome of each of the nearly 300 second generation plants and looked for instances in which the spurless plants had inherited two copies from their spurless grandparent. This narrowed the search to around 1,100 genes on one of the plants’ chromosomes.

Still, 1,100 genes are a lot to sort through. “There was no guarantee that these methods would lead us to the gene we were looking for,” Ballerini said. “There was definitely quite a bit of work that went into all of the experiments and analyses, but in the end there was a bit of luck too.”

Ballerini examined the expression of genes during five stages of early petal development in the spurless columbine and three other spurred species. She sequenced all the genes that were turned on in each stage and looked for consistent differences between the spurless and spurred plants. Eventually, with input from one of her collaborators at Harvard, Ballerini suspected she had identified the right gene. It was always turned off in the spurless species, turned on in the spurred species and was one of the 1,100 genes previously identified as associated with spurless flowers in the genetic cross. Now it was time to test her hypothesis. 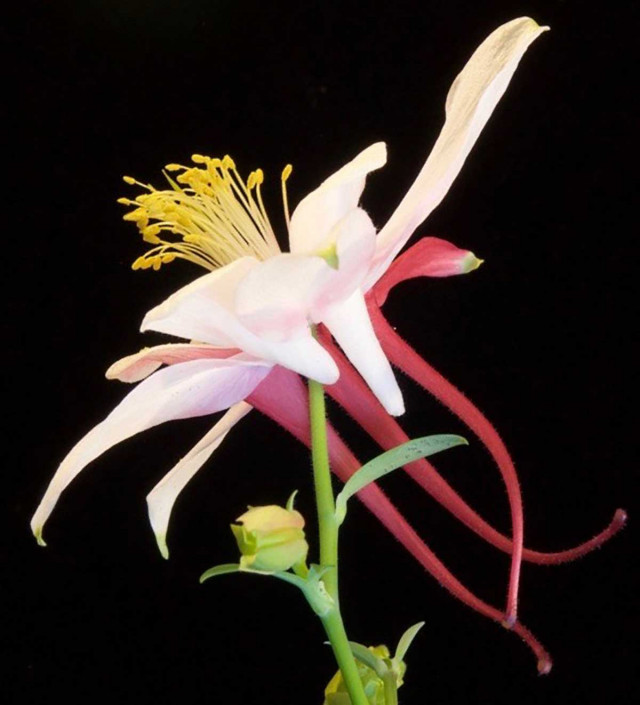 Cells in the white petals had POPOVICH and a gene for red pigmentation knocked out. The spurs were stunted as a result.

She used a genetically modified virus to knock down the expression of the gene in question as well as a gene critical for producing red pigment. This way they could tell which petals were affected just by looking at the color.

“The longer spurs had more cells, and the shorter spurs had fewer cells,” Hodges noted. “So the gene must have been acting by affecting how many cells were produced.”

Ballerini remembers sitting in her office after finishing her final analyses. She began throwing out potential gene names to graduate student Zac Cabin, a fellow sports enthusiast. “At the same time Zac and I turned to each other and both said ‘POPOVICH!’” she recalled. The name seemed a perfect fit. “And it leaves open the possibility that, if we identify other genes at play in spur development, we can name them after some of the players on the Spurs.”

A path to new discoveries

While identifying POPOVICH is certainly an achievement, the true value of the discovery lies in what it reveals about the evolution of key innovations. Before this work, none of the plant groups that had well-known genomes also made spurs. “We had no idea where to start,” said Hodges. “This discovery provides us a foothold.”

“Once we identify one gene — like this gene, which seems to be key in the process of forming spurs — then we can start to figure out all of the components,” he added. The team can now begin investigating which genes POPOVICH regulates, and which genes regulate POPOVICH. “This is a place to start to understand the whole system.”

While the researchers don’t know how POPOVICH functions in other groups of plants, it appears to influence the number of leaflets that grow on bur clovers. Columbines also express the gene in their leaves; perhaps it was recruited from the leaves into petal development, Ballerini suggested.

Novel adaptations don’t appear out of nowhere, she explained. “When you’re evolving a new structure, usually you’re not evolving a whole brand new gene.” Generally, organisms repurpose or add a purpose to an existing gene.

The authors are also interested in identifying genes involved in the second phase of spur formation: the elongation of the cells in the spur cup.

“These are things that we will want to do now that we’ve identified this gene,” Hodges said. “And since it’s a transcription factor, it must have particular genes that it’s affecting. The next logical step would be to identify the targets of this gene, and that would tell us a lot more about how it functions.”

The researchers expressed their gratitude toward Harvey Karp, who generously funded the Karp Discovery Award that made their research possible. “We really couldn’t have done this project without it,” Ballerini said.