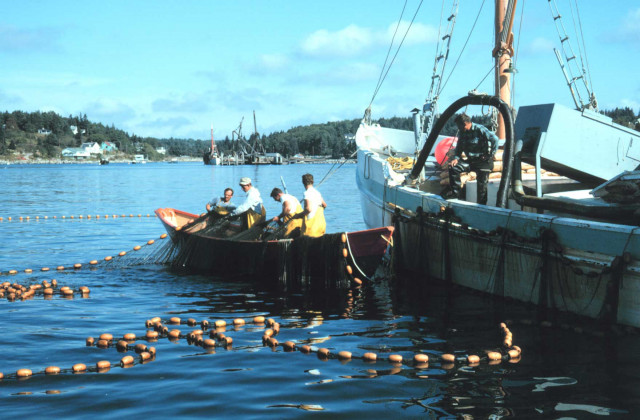 Purse seining for herring on the Maine coast. Credit: NOAA

Safety in numbers is a strategy that can work well for avoiding danger, unless of course the danger you’re avoiding specializes in numbers. Schooling behavior, the tendency for fish to collect in groups, has often emerged as an effective strategy for avoiding a predatory attack throughout the course of fish evolutionary history. However, forming large schools makes fish more vulnerable to capture by modern fishing technology designed specifically to capture entire fish schools, such as purse-seiners and trawlers.

A team of scientists from UC Santa Barbara, University of Washington, and the Santa Fe Institute explored whether high levels of industrial fishing could actually turn the tables on schooling behavior and change a fish’s preference for forming schools. Using an evolutionary model, they found that enough fishing could cause fish to lose the preference for forming large schools and instead opt for small schools or solitary behaviors.

“We don’t know if this is happening out there in the ocean, that fish are losing that tendency to form big schools due to industrial fishing practices, but our model shows that it could. And that if this indeed happens, it could be very difficult to reverse,” said Guerra.

Altering schooling behavior could have both ecological and socioeconomic impacts. Many marine predators, such as humpback whales and seabirds, feed almost exclusively on schooling fish. Similarly, thousands of human livelihoods depend on fisheries that target schools of fish. Recognizing whether or not schooling behavior is indeed changing is important for wildlife, the ecosystems they inhabit, and the humans that rely on them. The team’s findings are featured in Proceedings of the Royal Society B. 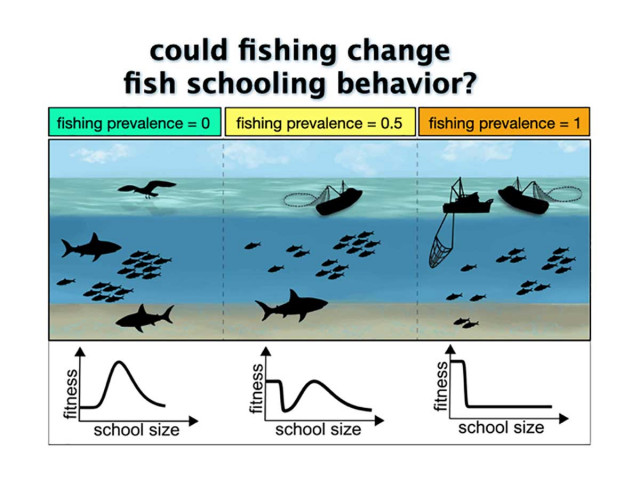