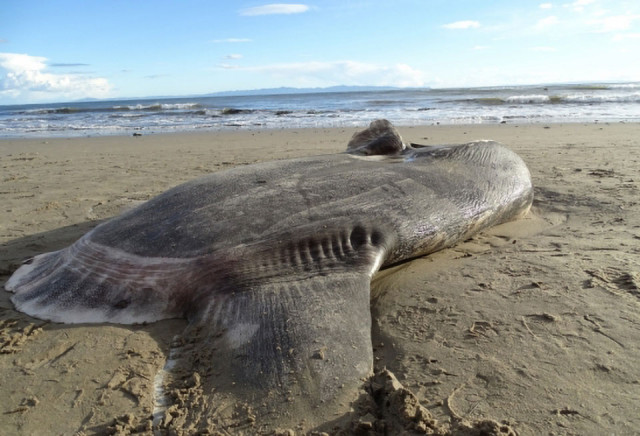 This hoodwinker sunfish, or Mola tecta, a species never before documented in the Northern Hemisphere, washed up at Sands Beach in February 2019. Credit: Thomas Turner

There are rare finds, and then there are those out-of-nowhere, first-ever discoveries that send scientists’ hearts aflutter. An occurrence at Sands Beach in Goleta a week ago lands decidedly among the latter.

A fish that washed in with the tides at UC Santa Barbara’s Coal Oil Point Reserve has been identified as a hoodwinker sunfish (proper name Mola tecta), a rare species whose very existence was only first described in 2017 — and has never before been observed in the Northern Hemisphere.

Thanks to the quick work and collaboration of reserve staff and UC Santa Barbara faculty, the official determination of Mola tecta was made by none other than the world’s foremost expert on the species: Marianne Nyegaard, of Murdoch University in Australia, who discovered and described the hoodwinker in what became the first addition to the Mola genus in 125 years.

“It really was exciting to collect the photos and samples knowing that it could potentially be such an extraordinary sighting,” said Jessica Nielsen, a conservation specialist at Coal Oil Point and coordinator for the reserve’s snowy plover docent program, who was the first to see the deceased fish and helped facilitate its identification. “Mola tecta was just recently discovered so there is still so much to learn about this species. I’m so glad that we could help these researchers make the final definitive ID.

“This is certainly the most remarkable organism I have seen wash up on the beach in my four years at the reserve,” she added.