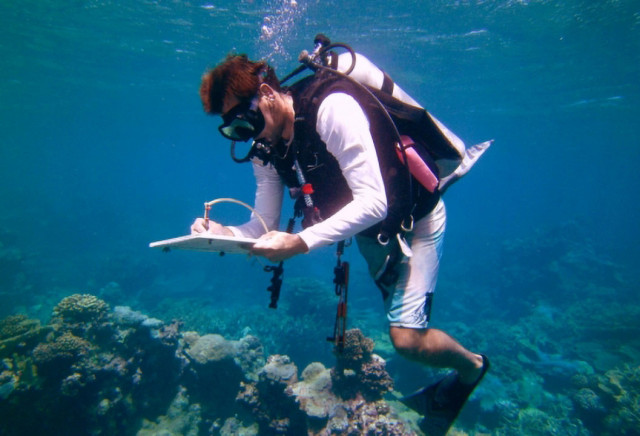 In the animal kingdom, food access is among the biggest drivers of habitat preference. It influences, among other things, how animals interact, where they roam and the amount of energy they expend to maintain their access to food. But how do different members of ecologically similar species manage to live close to each other?

This question was on the mind of UC Santa Barbara postdoctoral scholar Jacob Eurich as he studied territorial damselfish in Kimbe Bay, Papua New Guinea. Located within the Coral Triangle of the Indo-Pacific region, which is recognized for the greatest richness of marine life in the world, the coral reefs in the area are home to a variety of damselfish. This includes seven species that inhabit their own particular spaces, in some cases within mere meters of one another.

“Previously, scientists thought that all territorial damselfishes were herbivorous, farm algae and basically do the same thing ecologically on reefs,” explained Eurich, who conducted this research while at James Cook University in Australia. “Damselfish” is a very broad category, he added, with members such as clownfishes and the Californian garibaldi in the same family. The species of damselfish that are the subject of this research are the tropical territorial types, known to cultivate and protect algal beds on coral reefs.

In research published in the science journal Marine Biology, Eurich sought to understand how neighboring communities of these fish — which live in an ecological community of intense competition for resources — manage to thrive. 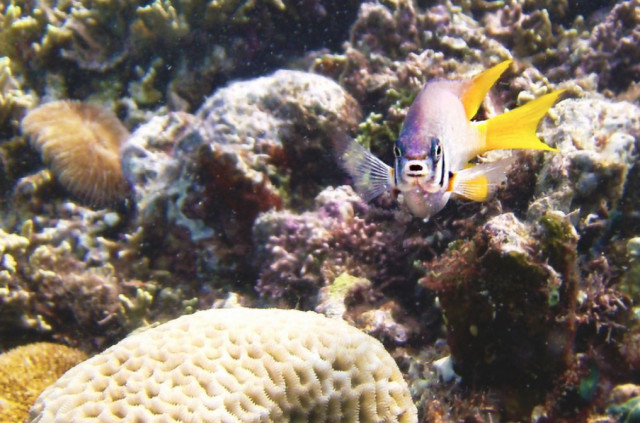 “We set out to understand how they live so close to one another without directly competing, and why,” he said.

The answer came after an in-depth look at the fishes’ diets using stable isotope analysis, which detects certain types of elements in their muscle tissues and links them to potential food items.

“It is based on the principle, ‘you are what you eat,’” Eurich explained. Rather than getting a snapshot of an animal’s diet by looking at its stomach contents, stable isotope analysis provides a long-term picture of what the animal consumes on a regular basis because the food is incorporated into the animal’s tissue.

The result? These farming fish are not exclusively farmers, nor are they exclusively vegetarian.

“The analysis proved that in fact not all territorial damselfish are herbivorous and we found evidence of planktivory, quite the opposite feeding regime,” Eurich said. Further, he added, these species had previously only been known to eat things off the reef. “We found evidence of two species foraging for food that drift by in the water column.”

These findings are significant on several levels. They indicate that certain broad ecological categorizations — such as the classification of territorial damselfish as herbivores — may not adequately serve some species, or the scientists and conservationists that study them. 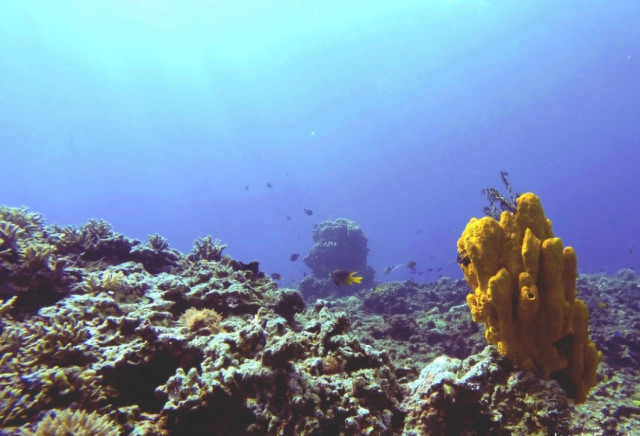 “I think it is a cautionary flag to scientists in all ecological-related fields to be careful when generalizing groups of similar species,” Eurich said. “Each species is likely partitioning a resource and if it doesn’t look like they are, there is a chance a technology with a finer resolution is needed to detect differences.”

Also, the study demonstrates an example of adaptation in areas of high competition for resources.

“An animal can’t spend all of their time and energy fighting a neighbor,” Eurich said. “In this study we showed some of the species switched diets to reduce competition.”

As climate change and subsequent ocean acidification and coral bleaching continue to affect life on the reef, territorial damselfish will remain one species to watch as they adapt to shifting conditions. So far they seem to be successful, in fact they are regarded “winners” of coral bleaching.

“Where most species die off due to the coral habitat loss, these algae-farmers actually increase in abundance,” said Eurich, who is now based in the McCauley Lab at UC Santa Barbara’s Marine Science Institute. “The study here shows how many of these species may coexist in the future. I think it is important to look at the competition and coexistence of species that may be the most abundant on future reefs.”