Can hungry zooplankton shape the distribution of marine algae? 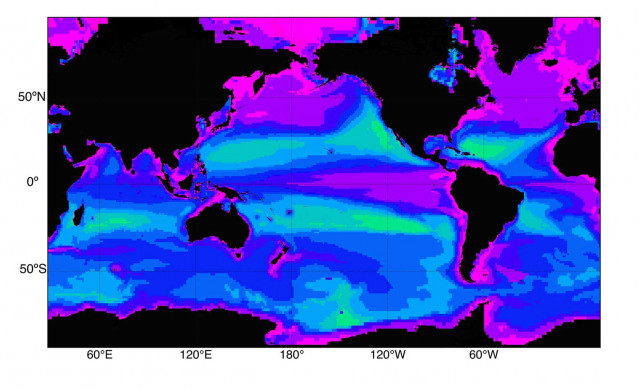 Phytoplankton--floating, single-celled photosynthetic organisms that harness the energy of sunlight to power aquatic food webs--are found throughout the world's marine and freshwater environments. Scientists have long been interested in their distribution, especially with depth. Because phytoplankton need sunlight to grow, it's not surprising that these organisms tend to live near the water's surface, where it's easier to conduct photosynthesis than in deeper, darker parts of the water column. Yet in many parts of the world's oceans and in many lakes, concentrations of phytoplankton are also found at depth. These subsurface peaks in abundance are called "Deep Chlorophyll Maxima" (or DCMs), named for the increase in their primary photosynthetic pigment, chlorophyll, which scientists detect using fluorometers. But why are phytoplankton accumulating so far away from the brightest sunlight?

In a new paper published today in Nature Communications, Holly Moeller, an Assistant Professor at UCSB, and colleagues Charlotte Laufkötter (University of Bern), Edward Sweeney (Sea Education Association; Santa Barbara Museum of Natural History), and Matthew Johnson (Woods Hole Oceanographic Institution) present a new hypothesis for the formation of DCMs. They synthesize published data showing that microzooplankton, the primary predators of many phytoplankton, exhibit light-dependent grazing: in environments with more sunlight, microzooplankton eat faster. This means that one explanation for DCM formation may be that, in shallower, brighter waters, phytoplankton populations are suppressed by rapid consumption by microzooplankton. Thus, their biomass can only accumulate in deeper, dimmer parts of the water column, where they can still photosynthesize, but their predators are less efficient eaters.

Light-dependent grazing is not the only mechanism that can cause DCMs to form. Historically, scientists have invoked a number of explanations that focus on resource-limitation (what ecologists term "bottom-up controls"), like the fact that nutrients (which phytoplankton also need for growth) may be depleted at the surface, and only available at depth. Thus, phytoplankton may form DCMs in "sweet spots" where both light and nutrient resource needs are met. Moeller and colleagues explore how light-dependent grazing, a "top-down control," can interact with these other mechanisms. They use a global ocean model, coupled with global oceanic datasets, to show that including both mechanisms simultaneously enhances our ability to predict DCM formation and depth.

Much remains to be explored about the distribution and activity of phytoplankton in the world's major water bodies. But since these tiny cells produce about half of Earth's oxygen, exploring their biology is critically important.