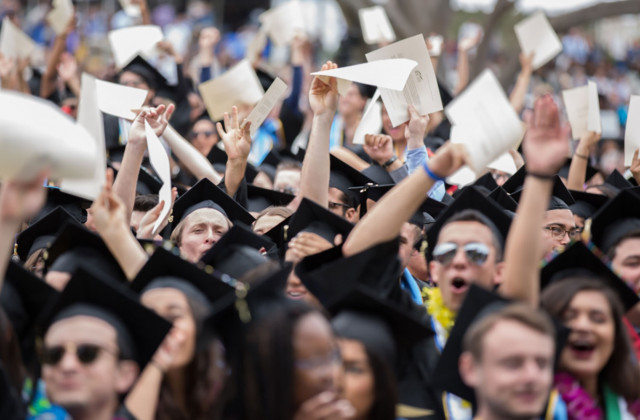 By the close of the 2017–2018 academic year, UC Santa Barbara will have awarded undergraduate and graduate degrees to a combined 6,784 students. The accomplishments of these graduates will be celebrated in eight official commencement ceremonies, to be held on campus over eight days, starting June 10 and concluding June 17.

The ceremonies are organized by college, level of degree and field of study. Chancellor Henry T. Yang will shake the hand of every student graduating from the College of Creative Studies, the College of Engineering, the College of Letters and Science, the Bren School of Environmental Science & Management and the Graduate Division.

The College of Creative Studies will lead off with its ceremony Sunday, June 10, at 11 a.m. in Campbell Hall. The Bren School of Environmental Science & Management will conduct its ceremony Friday, June 15, at 10 a.m. in the Bren Hall Courtyard.

On the weekend of Saturday, June 16, and Sunday, June 17, six ceremonies — three each day — will be held on the Commencement Green fronting the UCSB Lagoon.